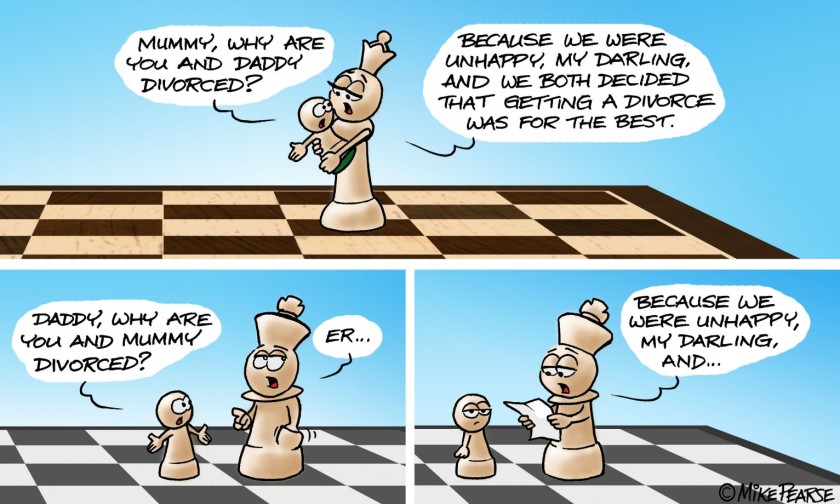 When I was fired from my position as Head of the Family, the Queen’s biggest worry was how to explain the upcoming divorce to our four year old son. She wanted to present a united front, essentially telling him it was a joint decision.

We had different views about what this divorce actually was. The Queen saw it as an event, like a lightning strike—tragic but unavoidable and nobody’s fault. Shit happens. Divorce happens. That’s how it is.

I saw the divorce as a decision she had made and that I had grudgingly accepted on the grounds that it’s wrong to compel a woman to stay married to a man against her will. Part-ownership of that decision, however, was further than I was willing to go.

‘So you want our son to see me as the Bad Guy?’ she said on the telephone.

‘Do you believe this divorce is for the best?’ I said.

‘Yes! My son has the right to a happy mother!’

‘Well, then—that makes you a Woman of Principle. Tell him that.’

I could hear her teeth grinding down the phone.

‘Oh, I think he’ll understand just fine. Isn’t that what you’re afraid of?’

After the call, she went ahead and explained to him her lightning strike model of Divorce. I neither contradicted nor supported it. When he asked me, ‘Why are you and Mummy getting divorced?’ I told him, ‘I don’t want to tell you.’ When he asked, ‘Why not?’ I said, ‘Because you’re young and this is grown up shit. Ask me again when you’re older.’ He accepted that. (Yes, I used the word shit, but ‘Swear Words & Small Children’ is a story for another time.)

He told the Queen, of course, and she called me in a rage. ‘He has the right to know the truth!’ she ranted.

‘We should present the same version!’

‘He’s already confused! He loves both Mummy and Daddy and he doesn’t understand why they have to be apart. Hell, that’s enough to confuse anybody.’

‘You’re talking about your own confusion, you selfish bastard. Would you stop thinking about yourself for a change and focus on what’s best for our son?’

‘That’s the kettle calling the pot black!’ I lowered my voice. ‘Do you know what the problem really is?’

‘You know that no matter what we tell him, the day will come when he will figure out for himself that the divorce was not a mutual decision. That it was you who wanted it. And I think you’re terrified—terrified—that your little boy will hate you for it. Aren’t you?’

There was silence on the line.

The Queen had hung up.